You can watch a video of the service and the tribute video at this page: CLICK HERE FOR DETAILS.

Those who wish to donate in Michael's memory may do  with the USLST Foundation or Harford County Right to Life.

Gravestone will be placed in few weeks. 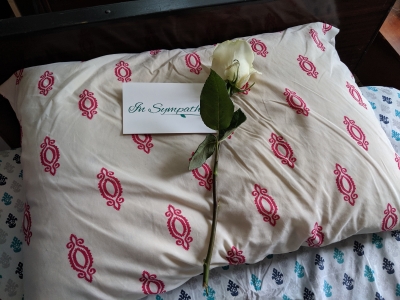 The Last Day of a Long and Amazing Life

On Monday, July 29, 2019, Michael had a stroke. Over the next few days, while Amedisys Hospice Care kept him comfortable, he would speak about a lifetime of topics, all randomly, all confused, but amazing to hear as his mind unraveled a lifetime of experiences. He spoke of trains and restaurants and music and asked by name family members and care givers. Many of whom were at his side at all times. One time he asked for his harmonica and played a few more notes of the music he had use to entertain and minister to others since his childhood.

Wednesday night we started playing classical music for him as we all retired for the evening. Thursday morning the nurse indicated he was unresponsive and his former wife, Susan K. Ciavolino, sat by his side all morning praying and reading scriptures. At noon she went in for lunch and Marco arrived about five minutes later. In that brief time he took his last breath and exited this world to join his Savior.

The staff told us that often someone at the time of death will not die until the room is empty. In a last spark of consciousness, the loved one wants to spare others of their precise departing and perhaps to experience a last moment of personal intimacy.

The staff at Dacota Broadcreek Assisted Living was extraordinary and took impeccable care of Mike in his final days. They hugged us and wept with us and helped start the processes that follows death. Within a few hours McComas funeral home staff arrived and with the utmost professionalism and compassion carefully wrapped his body and quietly removed him from his room leaving a rose and note behind.

We want to express our gratitude for the many people who came along side us to help us in the past years. You made his transition to his new facility so much easier.

We hope to see you at the service. If you want to share a story or tribute send it to This email address is being protected from spambots. You need JavaScript enabled to view it. and we will post them on this site.

Michael D. Ciavolino, Jr., 94, passed away on August 1, 2019. He was born in Brooklyn, New York on December 16, 1924 to Michael and Bessie Ciavolino. Michael is survived by his ex-wife Susan K. Ciavolino; his children Marco, Gina, and Laura; his grandchildren, Jordan, Liz, Amy, Emily, Jonathan, Rocky, and Michael; and his sister Doris Smith.

Michael graduated from Columbia University NYC where he received a master’s degree in Education. He first taught in Harlem NYC, and then in Flemington, NJ schools. Michael was a professional photographer; he created postcards in the Hunterdon County, NJ and Bucks County, PA areas; three of his photographs are in the NYC Museum of Modern Art. He was an accomplished musician on the clarinet, harmonica, tin whistle, and singing. He entertained in nursing homes often for people younger than himself! He loved teaching harmonica and sign language to students at New Covenant Christian School. Michael proudly served his country during World War II in the Navy on LST 395 in the South Pacific.

Visitation will be held at McComas Funeral Home, Bel Air, MD on August 6, 2019 from 1-2 pm with a memorial service at 2 pm. Michael will be laid to rest at the Garrison Forest Veterans Cemetery in Owings Mills, MD.

Those who wish to donate in Michael's memory may do with the USLST Foundation or Harford County Right to Life. See http://musicwithmike.com/obit for more information.